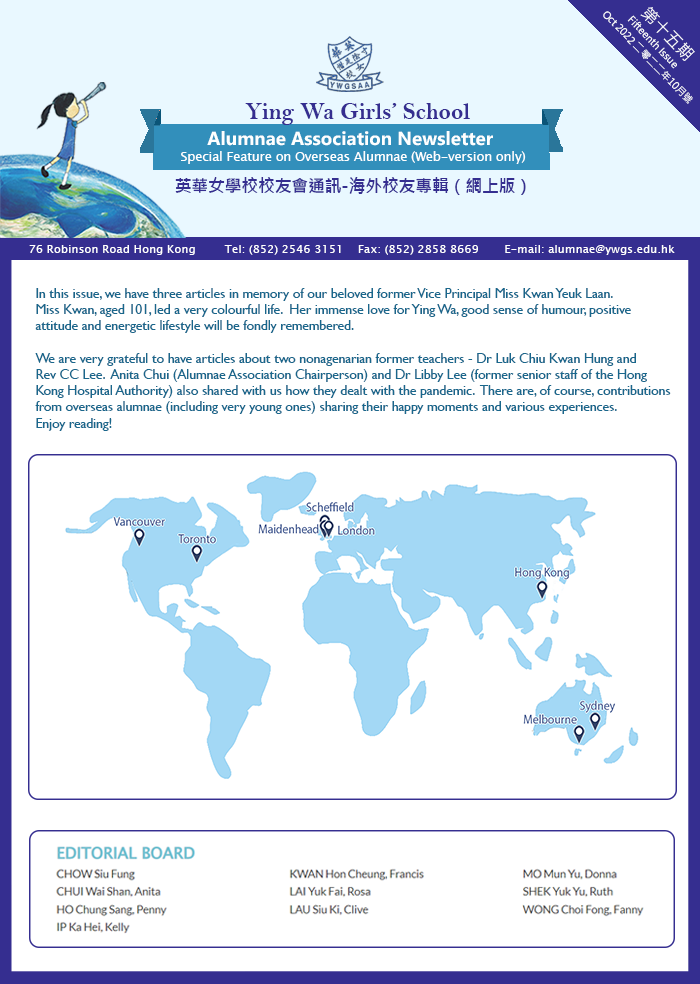 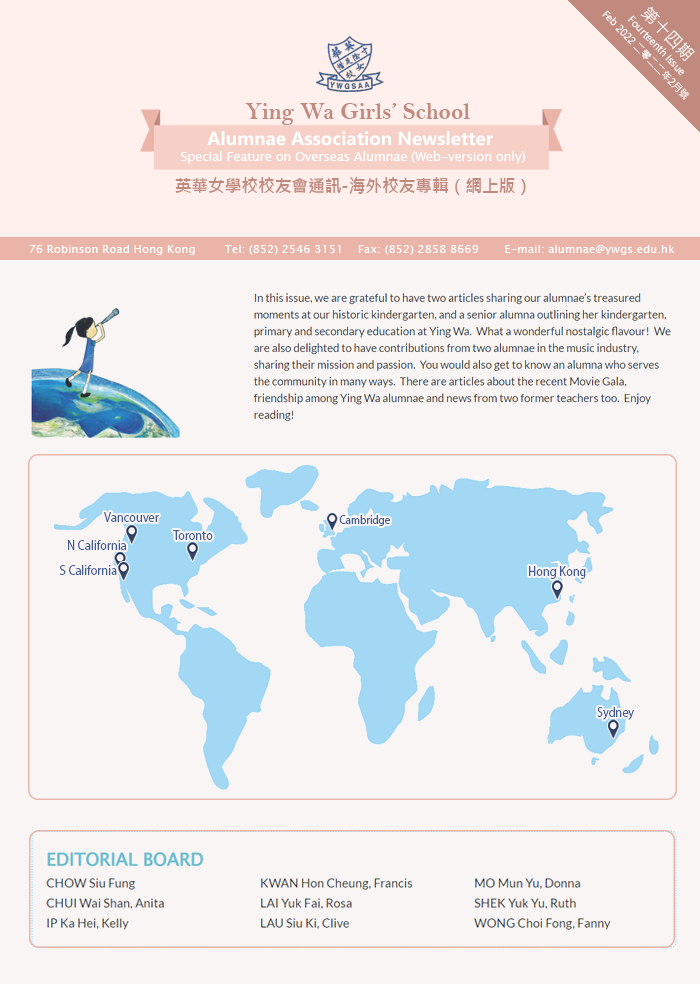 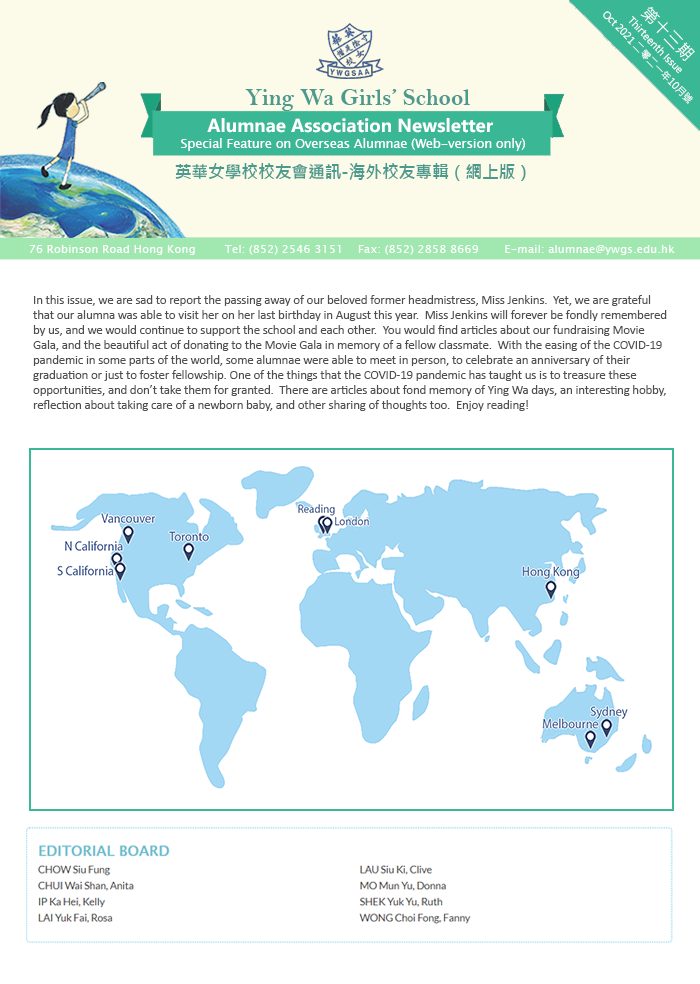 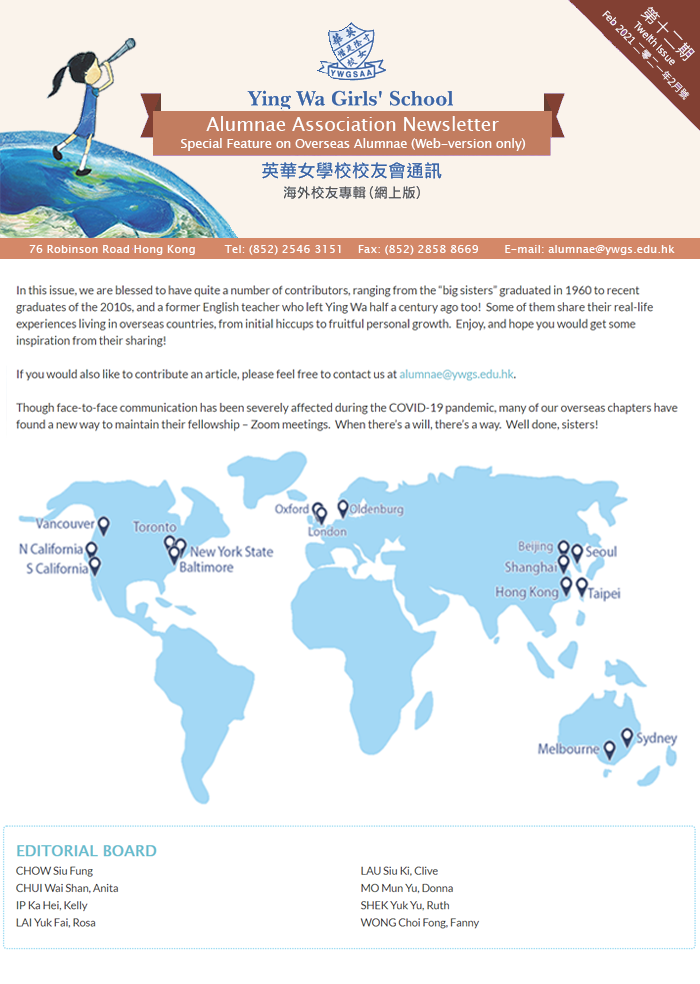 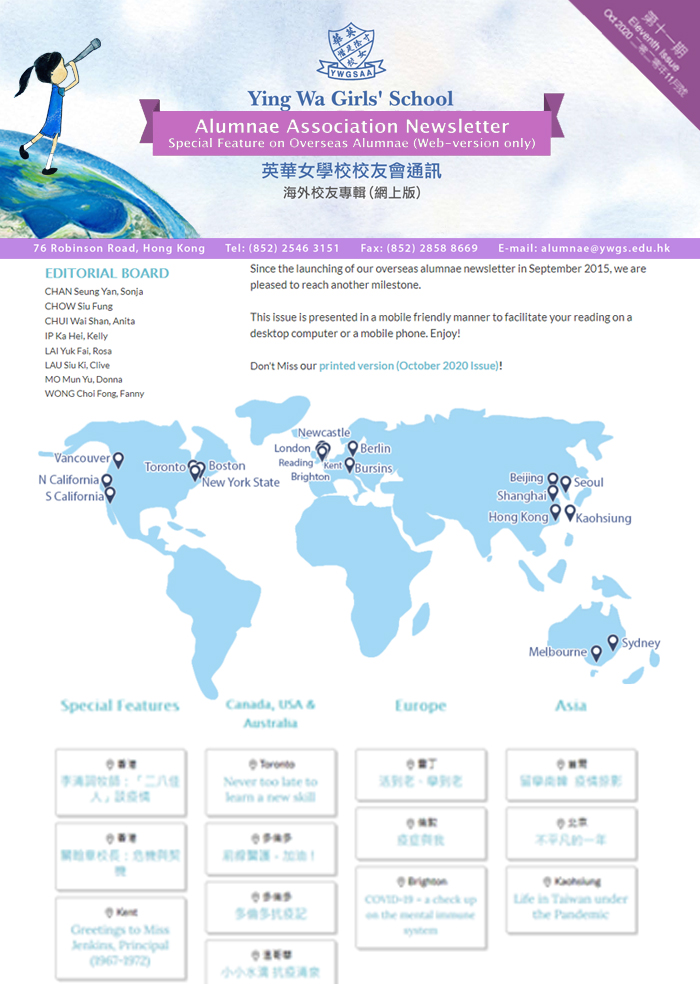 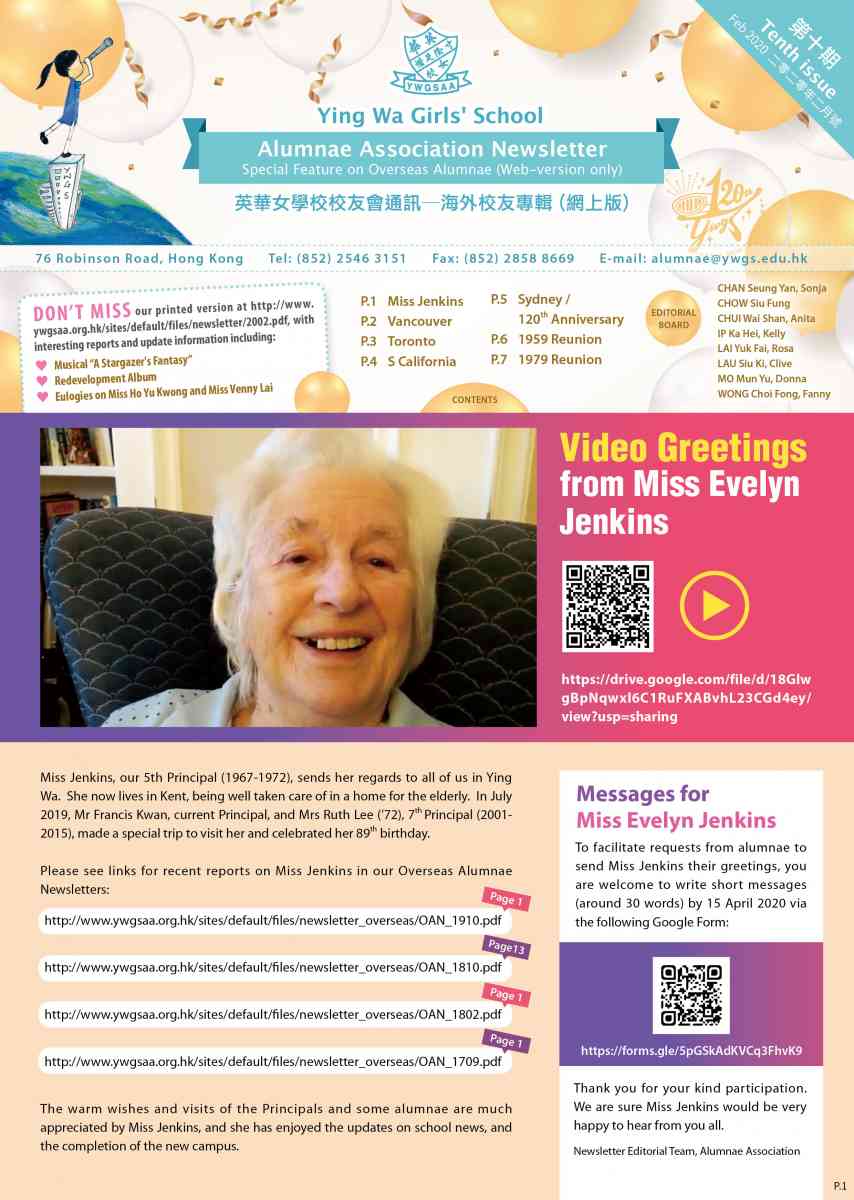 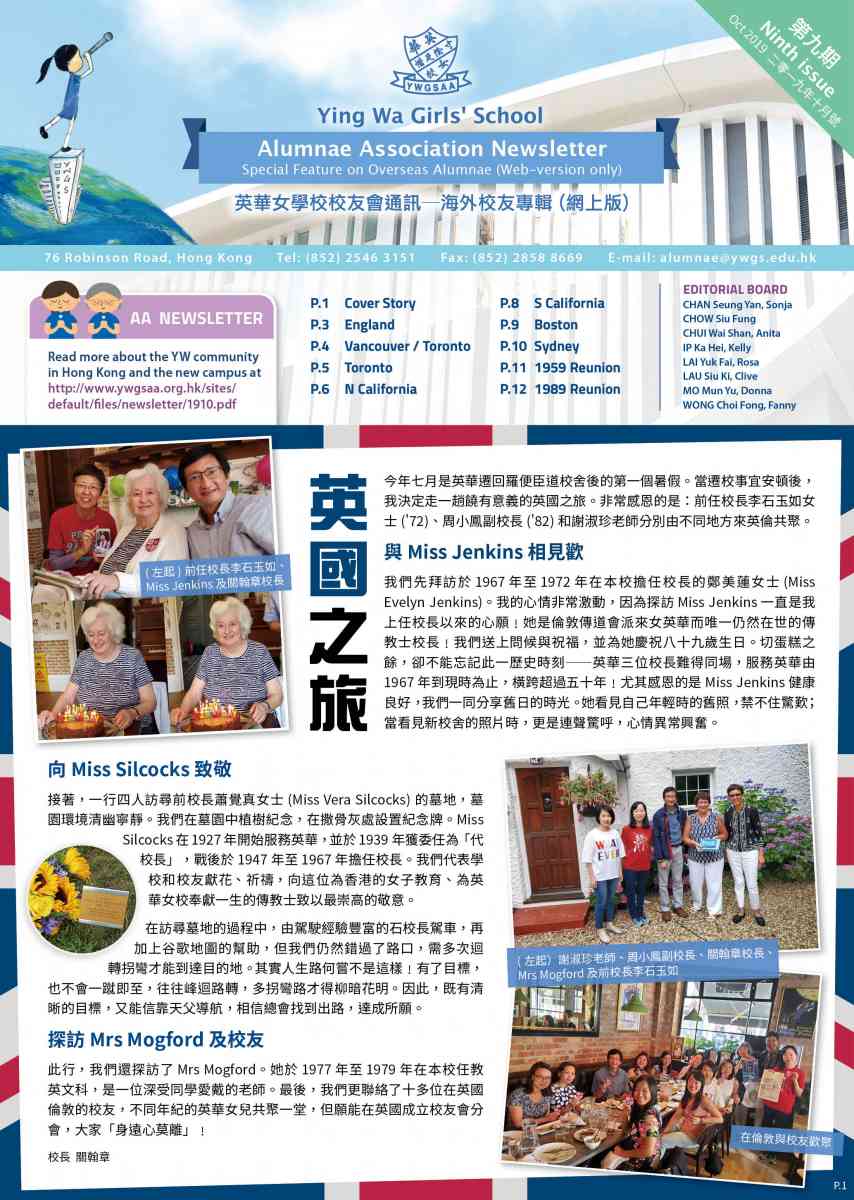 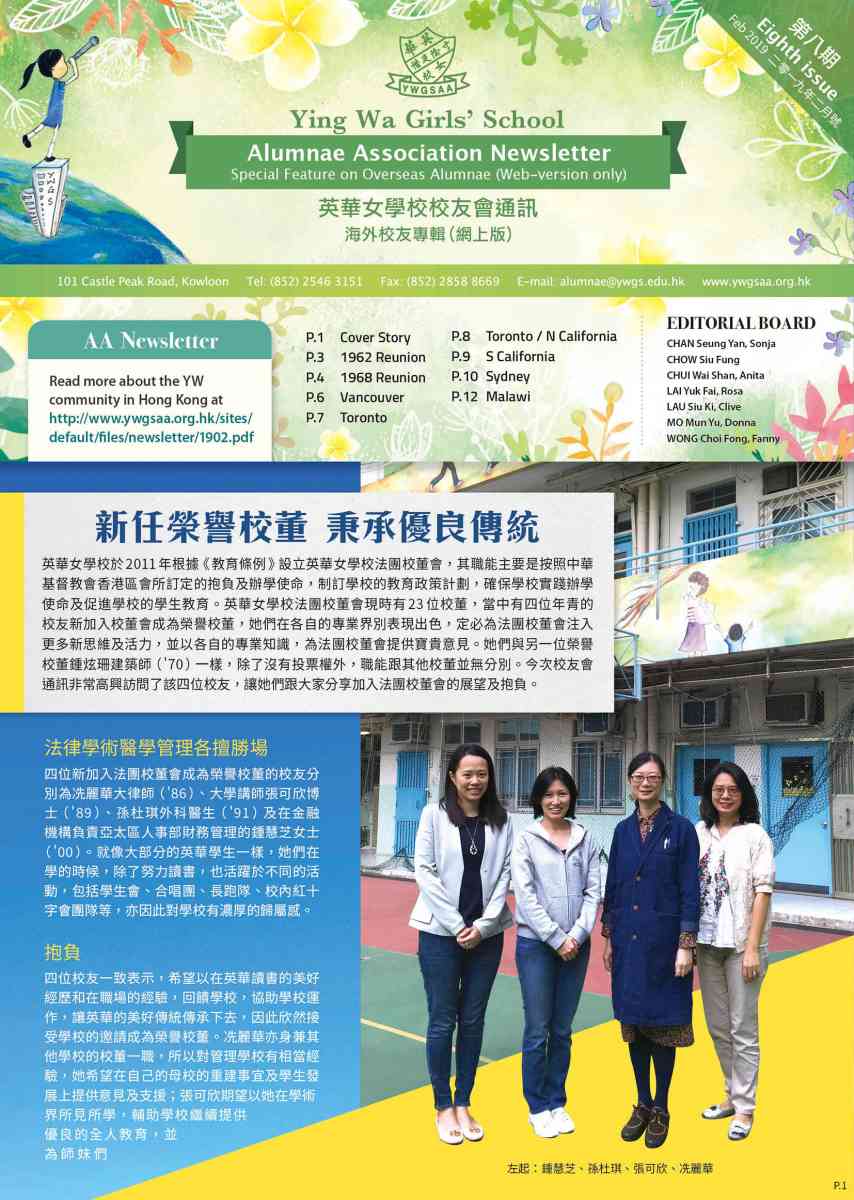 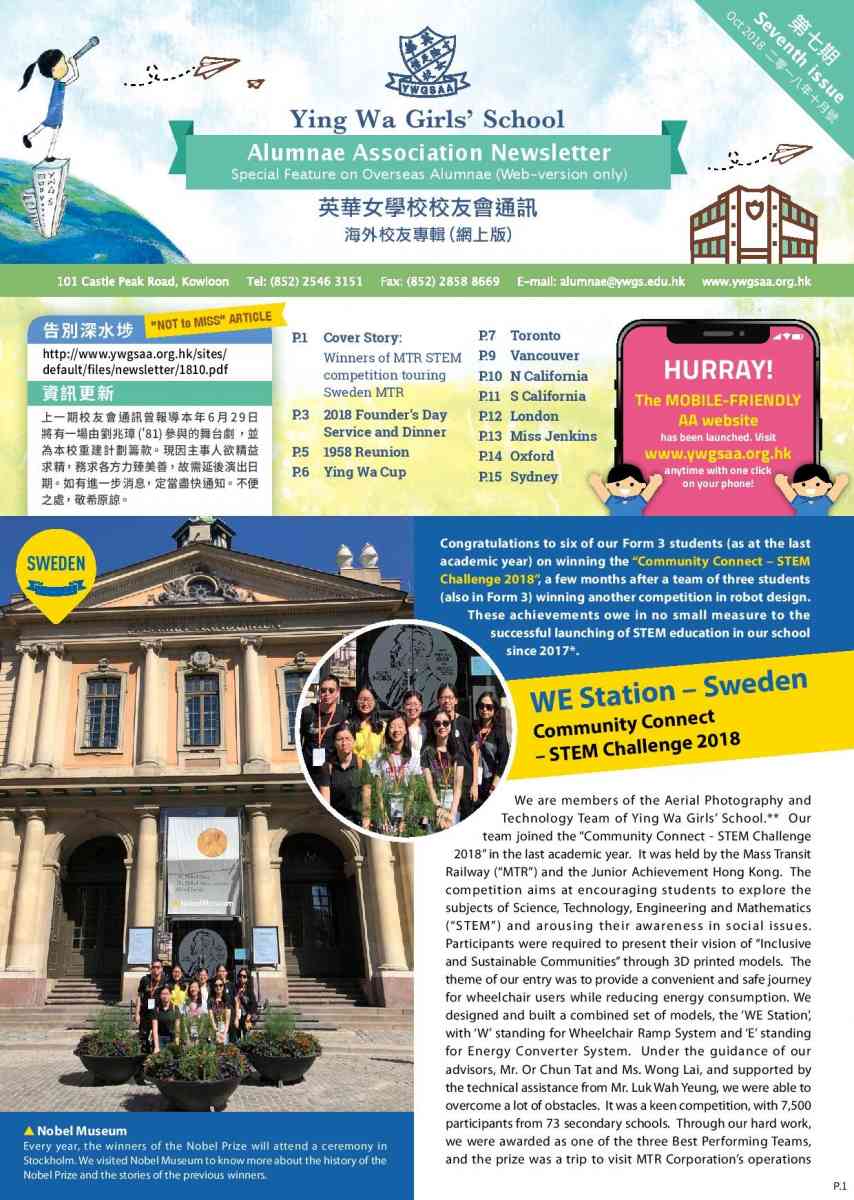 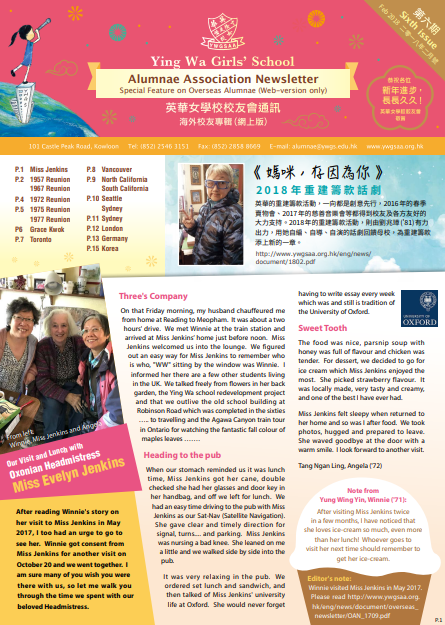 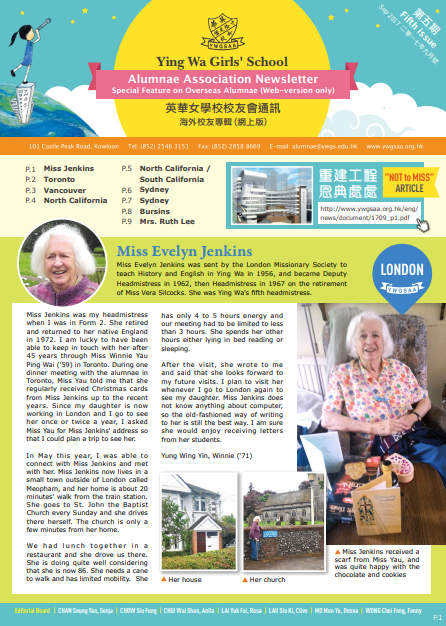 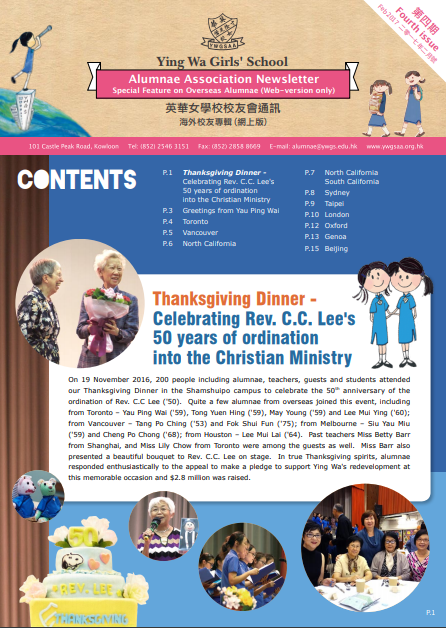 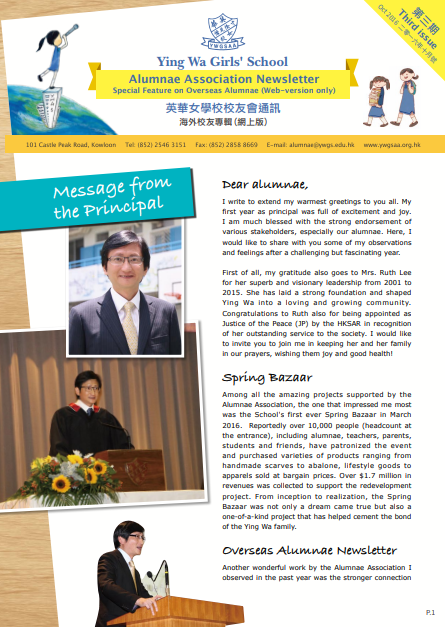 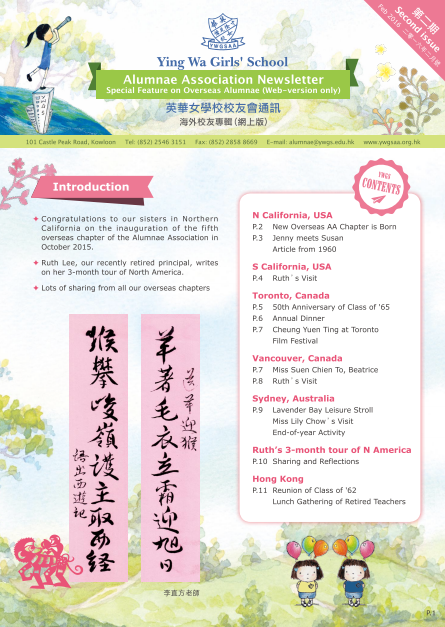 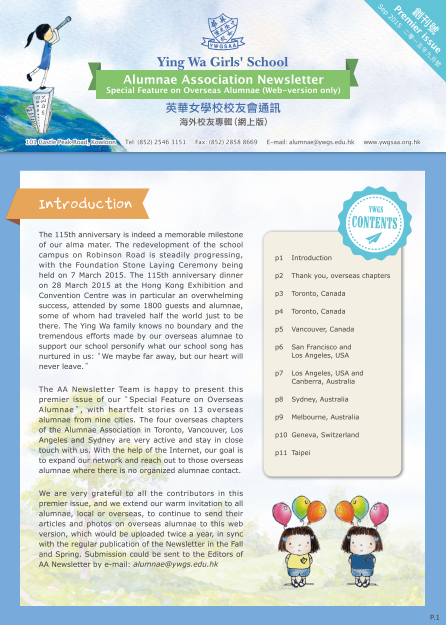 ** Posted on 30 Oct 2020:
The 11th issue of Overseas Alumnae Newsletter has just been released.  Since the launching of our overseas alumnae newsletter in September 2015, we are pleased to reach another milestone.  This issue is presented in a mobile friendly manner to facilitate your reading on a desktop computer or a mobile phone.

In this issue, we have invited overseas alumnae to share the COVID-19 news in their districts and received a variety of interesting articles from Canada, USA, Australia, UK, Germany, Switzerland and Asia.  Enjoy! [11th Issue]

** Posted on 14 February 2018:
The sixth issue of Overseas Alumnae Newsletter has just been released. There is a total of 15 pages with lots of interesting artciles including: 《媽咪，存因為你》2018 重建籌款話劇, Visit and Lunch with Oxonian Headmistress Miss Evelyn Jenkins, Reunion News of Classes 1957, 1967, 1972, 1975 and 1977 News from Toronto, Vancouver, North & South California, Seattle, Sydney, London, Germany and Korea. Enjoy your reading! [ Sixth Issue ]

** Posted on 26 September 2017:
The fifth issue of Overseas Alumnae Newsletter has just been released. It covers the latest news of Ms Evelyn Jenkins, the 5th principal of YWGS. There are also some happy activity reports from different corners of the world, including Toronto, Vancouver, North and South California, Sydney and Bursins. Last but not least, we have a lovely piece of sharing from Mrs Ruth Lee, former principal of YWGS! Enjoy your reading! [ Fifth Issue ]

** Posted on 20 February 2017:
The fourth issue of Overseas Alumnae Newsletter has just been released. Its cover story is a report on the Thanksgiving Dinner - celebrating Rev. C. C. Lee's 50 years of ordination into the Christian Ministry. Other articles include Greetings from Ms Yau Ping Wai and latest news from various Overseas Alumnae Chapters. There are some sharings from alumnae who has worked/studied overseas in Taipei, Genoa and Beijing. Moreover, Ms Lindy Mogford, former YW teacher in late 70s, also shared her fond memory of YW. Enjoy your reading! [ Fourth Issue ]

** Posted on 25 February 2016:
The second issue of Overseas Alumnae Newsletter has just been released. It covers the good news of the San Francisco overseas chapter recently set up and a very interesting article from Mrs Ruth Lee on her 3-month tour after her retirement. There are also lots of sharing from all our overseas chapters. Enjoy your reading! [ Second Issue ]

** Posted on 8 September 2015:
The AA Newsletter Team is happy to present this Premier Issue, with heartfelt stories on 13 overseas alumnae from nine cities. Mrs Ruth Lee, former YW Principal, has done a lot to strengthen the overseas alumnae network and this Premier issue launched at her retirement is a tribute to her wonderful contribution over the years. [ Premier Issue ]