The Outing Group of YWGSAA arranged a visit to the picturesque Double Haven (Yan Chau Tong) Marine Park on 2 December, 2017 which was well commented by the participants. The event was reported in the Alumnae Newsletter (February 2018).

This happy event was held on 19 March (Saturday), 10am - 6pm. Alumnae and family, parents and friends of Ying Wa arrived and enjoyed a relaxing enjoyable day, shopping, eating, chit-chatting and photo-taking with teachers and classmates. 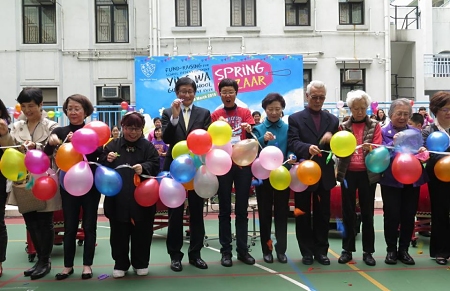 The Founder's Day Service was held at 4pm followed by the AGM.

A visit to the Shamshuipo campus was conducted on 7 Dec 2013 for alumnae to understand lives of students at the decanting site.

Activities of the day included prayer meeting, Shamshuipo historical tour by Dr Joseph Ting, touring-around by students in the vicinity of Shamshuipo campus, performance by Alumnae Choir and sale of souvenirs. The visit was attended by 90 participants.

A rough estimate of two thousand alumnae (boys and girls), family and friends returned to school for the Campus Farewell events.

Majority came back to reminisce, to take photos, to re-visit favourite corners and to get a souvenir or two. Many stayed behind for the "Last Lesson" in YW 「最後一課搞邊科」and the Thanksgiving Service at Silcocks Hall. Some played a basketball/volleyball game or joined the hymn-singing activity. All in all, there were crowds of people in almost every corner and all had a marvelous time!

Over 300 alumnae participated in this happy function on 10 Dec 2011 from 2.00 p.m. to 5.00 p.m. Many alumnae arrived in groups with their classmates while some came with their spouse and children. Some came back from overseas to attend the function and many young faces showed up too!

Alumnae joined in the hymn singing and later the consultation session in the hall. Undoubtedly the Master Chef Competition held in the Home Economics Room was a great hit!